China, like America or Australia, is a place where things come in big helpings. The country is home to the world’s largest radio telescope, dam and wind farm project, to name but a few records. So it is hardly any surprise that China has big plans for CSP, too.

At Pacific Green Solar Technologies, we believe the country’s immediate pipeline of projects could amount to anything up to 1.4 GW of capacity, which if realized could make the country one of the world’s top three CSP markets before the end of this decade.

That’s not bad going for a country that came late into the CSP game. A decade ago, China had still not dabbled in CSP technology, despite having a world lead in photovoltaics and excellent irradiation conditions for solar thermal power in the high desert plateaus north of the Himalayas.

In 2016, the Chinese authorities decided the time was right to embrace CSP. The country’s 13th Five Year Plan contained a target of 5 GW of CSP, to be installed by 2020. Of this, 1.3 GW was due to come online by 2018, spread across 20 demonstration projects with feed-in tariff support.

To say the target was ambitious would be an understatement. At the time, there was only around 4.7 GW of CSP capacity on the entire planet, and development had stalled in Spain and the US, the world’s two biggest markets.

Of the original 20 demo projects, which included nine power towers, seven parabolic trough plants and four compact linear Fresnel demos, only three made it through to commissioning in 2018.

These plants, totaling 200 MW, were still enough to put China among the world’s top five CSP markets in 2018, a significant achievement.

However, two of the tower projects and two of the compact linear Fresnel plants, adding up to a total of 335 MW, ended up dropping out of the demo scheme. Undeterred, the Chinese authorities extended the demo plant deadline up until the end of 2021, albeit with a lower feed-in tariff.

By the end of last year, Chinese developers had completed a further four projects and another three were under construction.

This year started with further good news for the sector as construction recommenced on a fourth project, the 50 MW Aksay parabolic trough plant—a first of a kind, using molten salts as a heat transfer fluid.

Along with a 50 MW non-demo power tower, this brough the total installed capacity in China to 500 MW, putting the country on a par with Morocco and South Africa, CSP’s third and fourth-largest world markets, respectively.

What happens next remains unclear: it is reasonable to expect that the three demo projects under construction could well be completed in time for the end of the feed-in tariff period this year.

However, a remaining six demo projects are listed as ‘pending’ by the Chinese trade information provider CSP Focus. Assuming all these projects come to fruition, either within the feed-in program or after it, that would add about 400 MW of capacity to the Chinese market.

At the same time, though, China Shipbuilding New Power has announced that it plans to build a 1 GW CSP plant with storage in Chayouzhongqi, Inner Mongolia.

If this goes ahead then China could potentially end up with close to 2 GW of CSP capacity, rivaling the US as the world’s second-largest market. 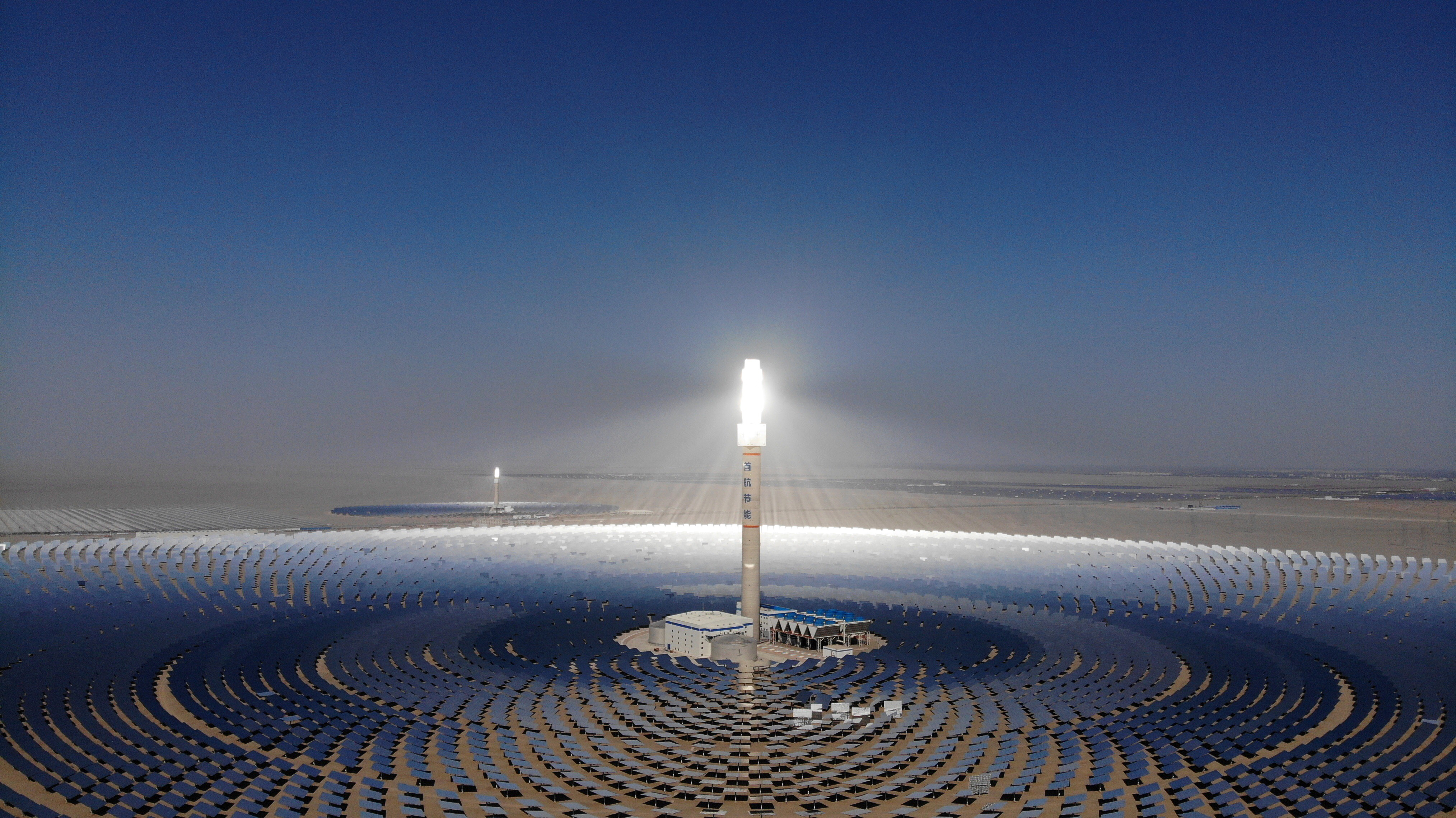 Of course, this prediction involves many ‘ifs’; in the absence of further government support for CSP, there is a danger that development could stagnate as has happened to other potentially promising markets worldwide. However, there are perhaps a few reasons to be optimistic about China.

The first is that the country has a voracious and growing appetite for energy, and historically most of this has come from coal generation.

Last year, though, Chinese President Xi Jinping said the country planned to have CO2 emissions peak before 2030, as part of a goal of achieving carbon neutrality before 2060.

The immediate impact of this announcement is likely to be further support for PV and wind, which represent low-cost replacements for existing thermal generation. As the amount of these intermittent renewables grows, however, China will also have to invest heavily in storage.

The country is already a world leader in lithium-ion battery production, but much of the upcoming manufacturing capacity for batteries will be required simply to serve national and foreign electric vehicle markets.

China also has considerable scope for further hydro capacity development, even though it was already the world’s largest hydroelectricity producer in 2020.

Still, it seems highly unlikely that CSP-attached thermal energy storage would not be part of the mix, particularly since China can now claim to have significant CSP project development experience.

Furthermore, that experience means it may be in international rather than national markets where the future of Chinese CSP plays out.

Chinese firms have already started participating in the latest projects to win tenders in the Middle East and elsewhere, and the companies’ ability to tap into China’s massive financing and manufacturing capability could give them an edge in foreign energy auctions going forward.

In looking to foreign markets, Chinese experts will be following in the footsteps of their predecessors from the US and Spain, the first two markets to commercialize CSP technology.

Modern CSP owes a debt of gratitude to Spanish and American engineers who travelled to build plants around the world when activity fell in their home markets.

China’s infrastructure developers, furthermore, are no strangers to overseas activity, having invested heavily in belt-and-road and similar programs over the last decade.

At Pacific Green Solar Technologies, we are well aware of this capability because we were involved in three of China’s first projects and are engaged in plans for upcoming plants.

Latterly, we have sought to combine this extensive project management expertise with US and Spanish experience, to create what is probably one of the most experienced and competitive CSP development teams in the world.

As such, China remains a key market for us, but we also see opportunity in many other parts of the world. In fact, this year will bring the CSP industry several big opportunities, so we are facing sunny skies ahead.