A giant solar project on the edge of the Sahara Desert has taken a step closer to reality, as developers of the proposed TuNur scheme filed an authorisation request with the Tunisian Ministry of Energy, Mines and Renewable Energy.

The consortium wants to build several huge concentrated solar plants (CSPs) near Rjim Maatoug in southwest Tunisia, with the combined potential to generate 4.5 GW of electricity which would be carried to Europe via undersea cables. The aim is both to bring economic growth to Tunisia, and to help Europe decarbonise. Part of the power generated will also be made available for local and national consumption, if the government agrees.

The project business case rests on two key advantages. TuNur says the proposed site receives up to 20% more solar energy than the best European sites. Secondly, the country has vast tracts of unused land for building on: the final installation could sprawl over 25,000 hectares (250 square km). 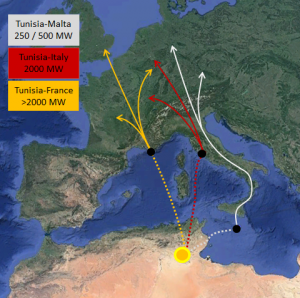 CSPs use a vast array of mirrors to reflect the sun’s rays onto a central tower, in which the heat generated can be stored in a molten salt core until needed, allowing flexible power generation.

The filing for authorisation is the first major development for the project in over a year. If permission is granted, the developers say the first project phase could be completed by 2020. This would involve a 250-MW CSP scheme with an HVDC connection to Malta. Up to 1 TWh of electricity per year could then be transported on to mainland Europe via the existing Malta-Sicily interconnector.

A second phase would involve a 2.25-GW plant with a dedicated 2-GW subsea cable running directly to central Italy, transmitting up to 9 TWh of electricity per year, the group says. This cable system is already in development and currently being evaluated by the EU as a Project of Common Interest.

A third cable linking Tunisia to the South of France at a later date is in the planning stage but would eventually allow the project to scale up to 4.5 GW.

The combination of generation and storage components would also enable the development to supply “baseload” electricity, the backers note.

TuNur itself is 50% owned by the UK-based Nur Energie and 50% by Tunisian and Maltese investors, all of whom were associated with the more ambitious pan-North African Desertec initiative.

That plan was abandoned due to a lack of agreement among project partners, cost concerns, and fears of regional instability, but TuNur hopes to avoid the same fate by having a smaller consortium focused on a specific project, in one country.

While promising on paper, TuNur will also have to come in on price. CSP costs are highly variable, but Morocco’s Noor III solar tower CSP has secured a power purchase agreement at US$163 per MWh in 2015.

Nevertheless, according to forecasts made in 2016 the International Renewable Energy Agency (IRENA) expects the levelised cost of electricity (LCOE) from solar towers to fall to US$80 per MWh by 2025 – and if the project proceeds as planned, TuNur could be at the vanguard.