With an average annual solar radiation of 2,000 kWh/m2 and a colossal industrial heat demand at medium temperatures, Tunisia has the essential ingredients needed to harness Concentrated Solar Heat (CSH) in industrial processes.

In fact, the country’s industrial sector is the largest consumer of energy today, accounting for nearly 30% of the total demand for primary energy, according to Ezzedine Khalfallah, energy consultant at the World Bank. The production of this industrial heat, which is currently done with conventional sources such as natural gas, LPG and fuel-oil, could use solar thermal energy instead, he says.

“The industrial sector consumes energy 75% in thermal form and 25% in electrical form. At the thermal level, much of the energy is consumed for industrial processes operating at temperatures above 150°C, particularly for the chemical, textile, food and paper industries,” says Khalfallah. 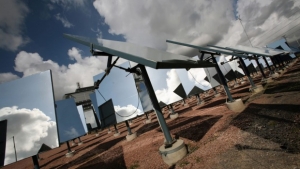 Tunisia’s potential for CSH in industrial processes has been studied through the various programs of the National Agency for Energy Conservation (ANME), mainly Prosol Industry[i] and the Dissemination of Innovative Solar Thermal Applications in the Tunisian Industry (DASTII)[ii].

ANME estimates a technical potential of about 3 million m2 for solar integration in industrial processes in Tunisia, with a real potential of 360,000 m2 after factoring in constraints such as space availability, temperature range, and process integration. Of this area, about 310,000 m2 could utilize CSH collectors with temperatures of 120–300°C, representing about 85% of the potential.

“The use of solar heat for industrial processes is one of the most promising markets for solar thermal technology, especially CSH, since medium-temperature use represents almost 85% of the identified potential,” says Abdelkader Baccouche, deputy director and head of the solar heat department at ANME. Figure 1. Tunis, the capital of Tunisia

Considering this potential, the Tunisian government set a goal to install 150,000 m2 of solar collectors by 2030 in the industrial sector, with 14,000 m2 to be deployed under the national development plan for 2016-2020.

To kickstart the market, ANME decided to initially focus on low-temperature process heat and technically mature technologies. Consequently, a first demonstration plant supported by Prosol Industry subsidies was integrated into the dyeing/washing process of Benetton’s textile factory in the town of Sousse in 2016. The 1,000-m2 Flat Plate Collector (FPC) field was set up through an Italian-Tunisian cooperation program to supply hot water at around 60°C.

According to Baccouche, the project cost around USD 331,200 and will save an estimated 1.5 ktoe over the plant’s lifetime. “We did this demonstration project to get the market started, because we have 10 factories of FPCs in Tunisia. Companies are already familiar with this technology as we have almost a million square meters of FPCs installed in the residential and tertiary sector.”

The greater potential however lies in CSH technology. “In a 2013 study we found the biggest potential was for medium-temperature applications. So, we need CSH technology like parabolic trough or Fresnel and we need to prepare the market and industrial sector to accept these technologies.”

Baccouche believes that most CSH system components can eventually be manufactured locally given the presence of mechanical, electronic materials, mirror and glass industries. These industries could expand their activities to manufacture CSH technology.

“A study we conducted in 2014 showed that almost all CSH technology components can be manufactured in Tunisia. While for the first projects we can import the technology and know-how, to create a long-term sustainable market, we need to focus on the local industry,” says Baccouche.

As for the payback time on future CSH investments, this could range from 5 to 10 years, and with subsidies and financing mechanisms, 4 to 8 years, he notes.

The Tunisian Energy Transition Fund for instance provides 30% subsidy for solar process-heat projects with a ceiling of 100 $/m2. Whereas the French development agency (AFD) provides loans of up to EUR 1 million per project on average for SMEs, with an encouraging interest rate of 6.75% and a repayment period of 10 years – the first three during which companies are exempt from repayment obligations.

“Concerning the sentiment of industries to install CSH units in their factories, I think it’s necessary to convince them of the benefits of this technology through good communication and realization of pilot projects,” says Khalfallah.

“It’s also necessary to support them technically and financially through the mobilization of financing, as was the case for cogeneration which benefited from credit lines allocated to local banks by donors such as AFD and the World Bank. This is the only guarantor for the development of a real sector of CSH for industrial applications in Tunisia.”

[i] Prosol industry is an initiative of ANME in cooperation with UNEP, the Italian Ministry for the Environment, Land and Sea, and the Mediterranean Renewable Energy Centre (MEDREC)

[ii] DASTII has been delivered in cooperation with GIZ and Fraunhofer ISE.