The research company said it had upgraded its forecast for the sector, expecting solar capacity to expand by an annual average of 55 per cent between 2017 and 2026, meaning that the segment will account for 7.9 per cent of total power generating capacity in the UAE by the end of the forecast period.

“We had previously forecast this share to amount to 5.9 per cent prior to the upgrade,” it added. 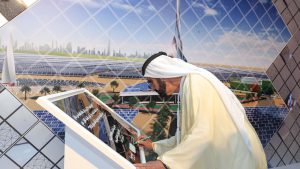 On September 16, Sheikh Mohammed bin Rashid, Vice President of UAE and Ruler of Dubai, hailed the launch of the world’s largest CSP plant as a milestone in the emirate’s ambition to generate 75 per cent of its energy needs from renewable sources by 2050.

“The successful tendering of the CSP fourth phase of the Mohammed bin Rashid Al Maktoum solar farm in Dubai adds to a series of positive developments in the UAE solar sector over 2017, and cements our upbeat outlook for the sector,” said BMI. “We expect CSP aspirations to expand as Dubai will increasingly look to bolster storage capacity in the solar sector over the coming years.”

The positive developments include Abu Dhabi awarding 1,177MW in its Sweihan photovoltaic (PV) solar tender at a price of 24.2/MWh in March and Dubai commissioning the 200MW PV second phase of the MbRAM solar farm in the same month.

Another positive development came in June when EDF reached financial close for the 800MW PV third phase of the MbRAM solar farm.

Under the terms of Dubai’s CSP contract, the new plant will deliver energy at 7.3 US cents per kilowatt-hour (kWh). However, that price is more expensive on paper than phases 2 and 3 of the project, which delivered prices of 5.84 cents and 2.99 cents respectively using solar photovoltaic (PV) technology.

“We believe that cost is not DEWA’s main rationale behind developing the facility, but rather its ability to store power for up to 15 hours via heat transfer,” said BMI. “In comparison, Morocco’s Noor II (150MW) and Noor III (200MW) can only store power equivalent to eight hours, and Noor I (160MW) only for three hours.

“The ability to store power will therefore mean that Dubai can access a more reliable source of solar power – with the potential of sourcing power from the CSP facility both at night and during days of little or no sun.”

The research firm added that this will also play a key role in Dubai meeting its target to source 7 per cent of its power supply from clean energy by 2020 – a share that is set to increase to 25 per cent by 2030 and 75 per cent by 2050 under the Dubai Clean Energy strategy 2050.

«The implementation of the largest CSP plant in the world demonstrates the UAE leadership’s commitment to the production of clean and renewable energy, and entrenches our place among the most advanced countries in this industry,» Sheikh Mohammed said on the project’s launch day.