The UAE’s wise leadership has worked tirelessly to anticipate the future, as a fundamental element of its strategies and plans. The vision of the UAE’s leadership, led by HH Sheikh Khalifa bin Zayed Al Nahyan, President of the UAE; HH Sheikh Mohammed bin Rashid Al Maktoum, Vice President and Prime Minister of the UAE and Ruler of Dubai; and HH Sheikh Mohammed bin Zayed Al Nahyan, Crown Prince of Abu Dhabi and Deputy Supreme Commander of the UAE Armed Forces, plays a key role in strategic planning, to ensure a brighter future for generations to come. 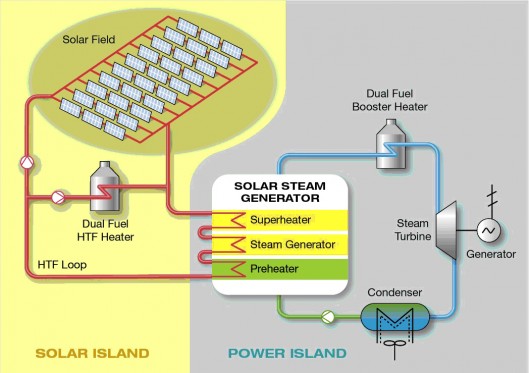 Despite being home to one of the largest oil reserves, the UAE has already started preparing to bid farewell to the last barrel of oil. Today, the UAE leads international efforts in clean and renewable energy, as result of its strategies and investments. The UAE’s National Agenda incorporates this vision to develop a sustainable environment, while increasing its dependence on clean and green development. The UAE has established itself as a pioneer in the international energy sector, and has already launched world-class projects to diversify energy resources, with a focus on solar energy, due to the UAE’s convenient location on the Sunbelt. Dubai receives about 2,200 kilowatts per square meter (kW/m2) of the Global Horizontal Irradiance (GHI), while the Direct Normal Irradiance (DNI) is 1,900 kW/m2, annually.  The amount of direct radiation can be used generate energy through photovoltaic (PV) and Concentrated Solar Power (CSP) technologies.

UAE Energy Strategy
The UAE Energy Strategy 2050 aims to develop an energy mix that combines renewable, nuclear and clean energy sources to balance economic requirements and environmental goals. By 2050, the UAE aims to invest AED 600 billion to meet the growing energy demand and ensure the sustainable growth of the country’s economy. The strategy also seeks to increase efficiency of individuals and organisational demand by 40%, and achieve savings of AED 700 billion by 2050.

Dubai Clean Energy Strategy 2050
Dubai has become an international pioneer in the development of smart cities, contributing to the renewable energy sector. It has also developed a number of techniques and practices to enhance the efficiency of the energy sector while rationalising consumption and finding alternative solutions to conventional energy. This supports the sustainable development of Dubai and the UAE. The Dubai Clean Energy Strategy 2050 was launched by HH Sheikh Mohammed bin Rashid Al Maktoum, to provide 7% of Dubai’s total power output from clean energy by 2020. This target will increase to 25% by 2030 and 75% by 2050. Dubai is the only city in the region to have launched such a promising strategy, with set goals and timelines that map the future of energy until 2050. The strategy consists of five main pillars: infrastructure, legislation, funding, building capacities and skills, and having an environment-friendly energy mix. The infrastructural pillar includes initiatives such as the Mohammad bin Rashid Al Maktoum Solar Park, which is the largest single-site solar energy project in the world, with a planned total production capacity of 5,000 megawatts by 2030, and a total investment of AED 50 billion.

“The vision of HH Sheikh Mohammed bin Rashid Al Maktoum has been both an inspiration and a guiding beacon in our march towards excellence. This has enabled us to launch many ambitious projects and initiatives, to achieve the UAE Vision 2021, and the Dubai Plan 2021, which aims to transform Dubai into a sustainable city with clean and healthy environment, while promoting Dubai as an international hub for trade, finance, and tourism. The Dubai Plan 2021 also creates a model through which we will achieve the highest standards of energy efficiency and increase our dependence on renewable energy sources. We are also working to achieve the goals of the Demand Side Management Strategy, to reduce energy and water demand by 30% by 2030, in order to make Dubai the city with the lowest carbon footprint in the world,” says HE Saeed Mohammed Al Tayer, MD & CEO of Dubai Electricity and Water Authority (DEWA).

Al Tayer noted that the Mohammed bin Rashid Al Maktoum Solar Park, which is being implemented by DEWA, will greatly contribute towards achieving the Dubai Clean Energy Strategy 2050, and the Green Economy for Sustainable Development initiative, which was launched by HH Sheikh Mohammed bin Rashid Al Maktoum, to develop a green economy and achieve the sustainable development of the UAE. Al Tayer noted that the solar park offers a host of promising investment opportunities to strengthen partnerships and investments between the public and private sectors in the field of energy. The soar park’s projects are based on the Independent Power Producer (IPP) model.

The largest single-site solar energy project in the world
In January 2012, HH Sheikh Mohammed bin Rashid Al Maktoum launched the Mohammed bin Rashid Al Maktoum Solar Park, the largest single-site solar park in the world based on the IPP model, over an area of 77 square kilometres. The solar park has a total planned capacity of 1000MW by 2020, and 5000MW by 2030, with a total investment of AED 50 billion. After completion, the solar park will reduce 6.5 million tonnes of carbon emissions annually.

1st Phase
The 13MW first phase became operational on 22 October 2013, and the project contributed to a major reduction of carbon emissions in adherence with the Clean Development Mechanism. The implementation of the first phase was an important step in achieving Dubai’s objectives to diversify energy resources. The first phase is built up of about 153,000 PV cells, connected to 13 transformers in inverter buildings. The output is transformed to 33 kilovolts (kV), and generates 24 million kWh of electricity annually. The first phase contributes to an annual reduction of about 15,000 tonnes of carbon emissions. The surface area of the project covers 280,000 square metres.

2nd Phase
The 20MW second phase 2 of the solar park is the largest and first project of its kind in the region’s solar energy sector, based on the IPP model. The project was implemented through a partnership with the consortium led by ACWA Power from Saudi Arabia, and Spain’s TSK, with an investment of AED 1.2 billion. The project will provide clean energy to 50,000 residences in the Emirate, reducing 214,000 tonnes of carbon emissions annually. This phase installed 2.3 million photovoltaic (PV) solar panels over an area of 4.5 square kilometres.

Third Phase
In June 2016, DEWA announced the selection of the Masdar-led consortium as the best bidder to develop the 800MW third phase of the solar park. DEWA set another world record by obtaining the lowest recorded USD 2.99 cents per kW/h for the third phase of the park, which will be implemented in stages until 2020.

Concentrated Solar Power Project
In June 2016, and in adherence with the directives of HH Sheikh Mohammed bin Rashid Al Maktoum, HE Saeed Mohammed Al Tayer, MD & CEO of DEWA, announced the launch of the CSP plant at the Mohammed bin Rashid Al Maktoum Solar Park. The announcement was made due to the success achieved by Dubai in the field of solar energy. The first phase will be operational by April 2021, and DEWA will generate 1000MW using CSP by 2030. In October 2016, DEWA issued a Request for Proposal (RFP) for the CSP plant, and received 30 Expressions of Interest (EOI) before the submission deadline. DEWA issued the project’s RFP on 15 January 2017, with a submission deadline by May 2017.

Al Tayer noted that the project will use thermal storage technology for 8-12 hours a day, taking technical and economic factors into account, to raise efficiency and provide a sustainable energy services to contribute to achieving people’s happiness.

The Research and Development (R&D) centre was launched in 2014 and is currently in the implementation phase. It will be completed by 2020. The R&D centre will base its work around the four main areas:
1. The production of electricity from solar energy: conducting research in cooperation with international institutions to study PV technology and mitigate the effects of dust on the performance of solar panels, while testing their long-term reliability to develop standards that meet the local climate.

2.  Smart Grid Integration: Conduct R&D to develop systems and technologies to control and rational consumption, while studying the effects of new technologies on the network, renewable energy sources, energy storage, 3D printing, and the use of Unmanned Aerial Vehicles (UAVs) in maintenance.

3. Energy efficiency: DEWA is cooperating with stakeholders and institutions from all over the world, to promote creativity among the youth, in the development of solar energy technologies, by launching leading initiatives.

4. Water: DEWA is exploring and working to develop sustainable solutions for the desalination and purification of water using solar energy, in addition to developing technology to produce drinking water from the moisture.

Innovation Centre and solar testing facility
DEWA is working to develop an Innovation Centre, equipped with the latest renewable and clean energy technologies. Through this, DEWA aims to raise awareness on sustainability, while enhancing national capabilities and increasing competitiveness. DEWA’s Innovation Centre will comprise four stories in addition to a ground floor, standing 90 metres tall. The Innovation Centre will be equipped with the latest clean and renewable energy technologies, and will serve as a museum and exhibition for solar energy. The centre will also feature two solar testing facilities, the first will specialise in testing PV solar panels, while the second will focus on CSP. The centre is currently testing 30 photovoltaic panel types from global specialist manufacturers to check the properties, analyse the results, and use them in research and development. It collaborates with international organisations on soiling and dust mitigation on photovoltaic equipment.

Solar powered water pumping and desalination plant
The solar-powered water pumping and desalination station at the Mohammed bin Rashid Al Maktoum Solar Park use PV solar panels to desalinate water with Reverse Osmosis (RO) technology, with a production capacity of 50 cubic metres (around 11,000 gallons) a day. The project is in cooperation with the UAE Water Aid Foundation (Suqia), under the umbrella of the Mohammed bin Rashid Al Maktoum Global Initiatives, to provide clean and safe drinking water for people in needy countries, through funding and supporting water technology projects to combat drought.

Global interest
The Mohammed bin Rashid Al Maktoum Solar Park has seen considerable interest from international developers since its launch. DEWA has also received a number of Expressions of Interest (EoI) from international organisations. This reflects the confidence of international investors in the projects that are supported by Dubai Government. Many global developers expressed their desire to invest in development and implementation of the solar park, which contributes to providing promising opportunities in Dubai at various levels.