Among various solar energy technologies, one is referred to as concentrated solar power, or concentrating solar power. The acronym CSP applies to either.

Worldwide CSP systems generate solar power by using mirrors or lenses to concentrate a large area of sunlight, or solar thermal energy, onto a small area. The concentrated heat is used to eventually spin a turbine and generate electricity, a technique which is considerably different from how PV systems generate electricity. CSP depends on moving parts, whereas photovoltaics don’t.

According to the Solar Energy industries Association (SEIA), CSP plants use differing formations of mirrors to concentrate the energy from the sun to drive traditional steam turbines or engines that can create electricity.  Ideally, the thermal energy concentrated in a CSP plant can be stored and used to produce electricity whenever it is needed, day or night. 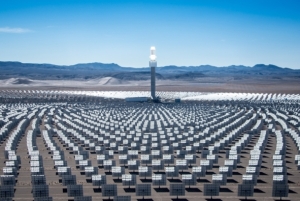 From the early 1980s through the early 1990s, 11 CSP plants were installed in the Southwest with more than 400 megawatts of capacity. But as government support for solar R&D dwindled, expensive commercial CSP plants couldn’t economically compete on their own. Today, over 1,400 MW of CSP plants operate in the United States, and another 390 MW will be placed in service in the next year.

Today there are now 1,685 megawatts of CSP plants in operation in the US. But only one plant, SolarReserve’s 110-megawatt Crescent Dunes project in Nevada, is slated to come online soon, leaving a number of ambitious CSP plans frozen on the drawing board.

As shown by SEIA, there are four predominant models being used for CSP systems, three which rely on steam power to drive a turbine..

Parabolic trough systems, or linear concentrator systems, use curved mirrors to focus the sun’s energy onto a receiver tube running in the trough’s center.  In the receiver tube, a high-temperature heat transfer fluid (such as a synthetic oil) absorbs the sun’s heat energy, reaching temperatures of 750°F or even higher. This then passes through a heat exchanger to heat water and produce steam.  In turn, the steam drives a conventional steam turbine power system to generate electricity.  A typical solar collector field contains hundreds of parallel rows of troughs connected as a series of loops, which are placed on a north-south axis so the troughs can track the sun from east to west.  Individual collector modules are typically 15-20 feet tall and 300-450 feet long.

CLFR uses the principles of curved-mirror trough systems, but with long parallel rows of lower-cost flat mirrors.  These modular reflectors focus the sun’s heat energy onto elevated receivers, which consist of a system of tubes through which water flows.  Again, the concentrated sunlight boils the water, generating high-pressure steam for direct use in power generation and industrial steam applications.

Power tower systems, and their variations, use a central receiver system (the tower), which allows for higher operating temperatures and thus greater efficiencies. Computer-controlled flat mirrors, called heliostats, track the sun along two axes and focus solar energy on a receiver at the top of a high tower.  This focused heat energy is used to heat a transfer fluid (over 1,000° F), which then produces steam to run a central power generator.

In a dish engine, mirrors are distributed over a parabolic dish surface in order to concentrate sunlight on a receiver fixed at a focal point.  In contrast to other CSP technologies that employ steam to create electricity using a turbine, a dish-engine system uses a working fluid such as hydrogen, which is heated up to 1,200° F in the receiver to drive an engine such as the Stirling engine.  Each dish rotates along two axes to track the sun.

CSP is not a new technology. In fact, SEIA reports nine CSP plants, totaling over 350 MW, have been in daily operation near Kramer Junction, California, for over 20 years. In the last four years, new plants have come online in Arizona, Nevada, and California.

Israeli-based AORA Solar operates a CSP variation in Spain, Israel, and the US, using a 24-hour hybrid system. Referred to as the Tulip system, the AORA platform combines solar power during daylight with diesel, natural gas or biofuels at night. An Arizona facility is being developed in a partnership with Arizona State University.

“ASU is a natural partner for us, not only because of its sunny location, but because of the university’s dedication to innovation and sustainability,” said Zev Rosenzweig, CEO of AORA Solar, in a press statememt.

“We are excited to make our debut here in the United States with this innovative technology where we will continue to grow and develop the Tulip into a system that cities and industries around the world use to generate continuous energy with renewable resources. ASU’s breadth of research capability will undoubtedly allow us to increase output, and reduce overall costs which will bring us to commercial viability. Our confidence in this project is enhanced with the participation of Project Director, Ellen Stechel, who has spearheaded the concept from the beginning, along with her colleagues Gary Dirks, William Brandt and the ASU LightWorks team.”

“When it comes to developing renewable energy technology for Africa, collaboration is the key to innovation,” said Zev Rosenzweig, CEO of AORA.

“ Collaboration will include joint activities for research park development, in addition to the development and strengthening of renewable energy curricula for solar electric, solar thermal, photovoltaics, wind, and sustainable fuel technologies. The cooperation also aims to lay the groundwork for the installation of AORA’s solar-biogas hybrid power technology at both Ethiopian institutions.”

Like any thermal power plant, the SBC Energy Institute writes, “CSP needs water for cooling processes, which may have a significant environmental impact in arid and semi-arid areas. Dry cooling, an established technology in conventional power plants, can already reduce water consumption by more than 90%, resulting in an increase in electricity-generation costs of 5%.”

The DOE’s SunShot Initiative supports the development of novel CSP technologies that will help to lower cost, increase efficiency, and provide more reliable performance when compared to current technologies. These projects demonstrate new concepts in the collector, receiver, thermal storage, heat transfer fluids, and power cycle subsystems, as well as technologies that will lower operations and management costs. The SunShot CSP program is most interested in transformative concepts with the potential to break through existing performance barriers, such as efficiency and temperature limitations.