Researchers and industry are cooperating within the SOLAM (solar melting of aluminium in a directly radiated rotary kiln) project to develop a method by which aluminium foundries could use solar energy to melt this metal. The method would allow the companies to reduce their electricity consumption to a great extent and substantially lower their carbon dioxide emissions. Scientific institutions and companies from South Africa and Germany are collaborating in this project, which is coordinated by the German Aerospace Center (Deutsches Zentrum für Luft- und Raumfahrt; DLR).

South Africa has vast reserves of natural resources, and local coal is still used for over 90 percent of the country’s power generation; thus, South Africa is among the world’s 15 largest producers of greenhouse gases, and the country itself is increasingly feeling the effects of climate change. Metalworking accounts for roughly 30 percent of the manufacturing industry, and is therefore the largest sector. Using this solar method to melt metals could substantially reduce carbon dioxide emissions and energy costs. Working alongside the DLR Institute of Solar Research , the Aachen-based company AixProcess GmbH is contributing its expertise to simulate a suitable system. The project partners in South Africa are the Council for Scientific and Industrial Research (CSIR) and the National Foundry Technology Network (NFTN), the largest South African power provider, Eskom, and the Department of Science and Technology (DST). The German Federal Ministry of Education and Research (Bundesministerium für Bildung und Forschung; BMBF) is funding the project for three years, from April 2015 to March 2018. 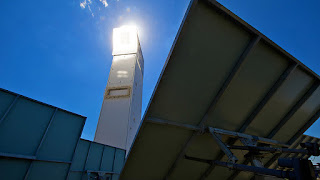 Initially, the project partners will develop a ‘rotary solar kiln’, used to melt and recycle aluminium. A rotary kiln is not dissimilar to an elongated drum of a washing machine, rotating at low speed. Effectively, this rotational movement constantly mixes the aluminium deposited in the drum, and therefore ensures an even distribution of heat. Here, solar energy is used to heat the aluminium. The researchers will use solar mirrors to focus the Sun’s radiation and achieve the necessary temperatures of approximately 700 degrees Celsius. The system developed within the project will undergo testing on the solar tower at the DLR Institute of Solar Research in Jülich from 2017 onwards. This facility has over 2000 mirrors designed to concentrate solar radiation on a point situated 60 metres up, at the top of the tower.

In addition to the system itself, the project partners will prepare a logistics concept, detailing how the molten aluminium can be transported from the central solar melting plant to the production facilities that will process the liquid metal. The findings from the demonstration phase will also be used to produce a business plan for a commercial pilot system. "The aim of the project is to develop an energy and cost efficient method that can be implemented across a variety of system sizes, depending on the requirements," summarises project manager Martina Neises-von Puttkamer.

Initial tests at the DLR solar furnace in Cologne

First of all, the scientists will test a small rotary kiln on a laboratory scale at the DLR solar furnace in Cologne. A number of tests will involve melting small batches of aluminium scrap, and then analysing the quality of the molten aluminium. Then, AixProcess will use its expertise in process and flow simulation to model the reactor and the process itself. The researchers will take the calculations from the simulation to optimise the reactor, enlarging its scale to a size suitable for use in industrial processing. The full-scale numerical models will also form the basis for technological and economic assessments of the melting process.

The BMBF is funding the SOLAM project as part of the support measure ‘International Partnerships for Sustainable Technologies and Services for Climate Protection and the Environment – CLIENT’ under the ‘Research for Sustainable Development’ framework programme. The research and development projects funded here are intended to strengthen cooperation with emerging countries and produce sustainable solutions to reduce the environmental impact for the partner nations.