Transferring power from Africa to Europe via a high voltage direct current (HVDC) transmission line could be a sustainable business model with added value for both regions.

This is the conclusion reached by researchers in the EU-sponsored BETTER project (Bringing Europe and Third Countries Closer Together Through Renewable Energies), conducted by the German Aerospace Center (Deutsches Zentrum für Luft- und Raumfahrt; DLR) in cooperation with CIEMAT (Centro de Investigaciones Energéticas, Medioambientales y Tecnológicas) and other partners.

Demand for variable power in Europe 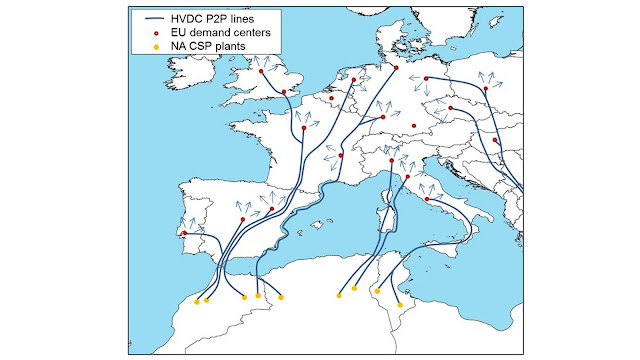 Importing power derived from renewable energies to Europe from non-European countries has been provided for by the European Commission since 2009 and is regulated under article 9 of EU Directive 2009/28/EC. But to date this option has not been exploited by energy suppliers. The aim of the BETTER study was to investigate the prerequisites under which such imports are economically, ecologically and societally practical. The researchers concluded that there is increasing demand for variable yet renewable power in Europe. This is particularly in view of the fact that, in Germany, fossil fuel power plants such as coal- and gas-fired stations are increasingly due to be replaced with renewable energy sources.

Thanks to consistent irradiation throughout the year and energy storage facilities, solar thermal power plants in North Africa can supply readily variable power during the day and night. Even if there is no sunlight for an extended period of time – a rare occurrence in North Africa – additional heating from natural gas can be used for assistance in the short term, to ensure that power can be supplied when required.

Higher energy price in the event of great demand

"At first glance, solar energy from Africa is more expensive for Germany than wind and photovoltaic power . But when there is a shortage of wind and photovoltaic power in Europe, such as in the early evening or on cloudy days, the price per kilowatt hour of power rises," explains Franz Trieb, Project Leader of the BETTER study at the DLR Institute of Engineering Thermodynamics. If solar power plants in Africa were to supply Europe with renewable energy for several hours a day in such situations, both sides would benefit. This would represent a sustainable, cost-covering business model for power suppliers in Africa. This would be of benefit to Europe, as it would allow an increase in renewable energies in a cost-effective manner, and at the same time guarantee a reliable supply of power.

The study also shows that a 15–20 percent share of variable solar power import could result in a massive reduction in the amount of new infrastructure required for the energy turnaround. Under these conditions, Germany would need significantly less grid development, energy storage and conventional back-up power plants. Power imports to Europe can therefore make a substantial contribution to the achievability and acceptance of the energy turnaround.

The researchers also investigated whether it is less costly to transport the energy to Europe using point-to-point connections (HVDC transmission lines) or via a supergrid. A supergrid is a well-developed power grid extending across Europe that is capable of accepting incoming power from a fluctuating renewable supply at any time and distributing it to consumers across Europe in line with demand. The researchers came to the clear conclusion that the outlay required for such a supergrid would be immense if variable renewable energy imports were not involved. The power grid in Germany would have to be capable of accepting or forwarding eight times the present power levels to its neighbours – and Spain 55 times as much.

HVDC transmission lines would require a certain level of expenditure as well. However, they have the advantage of being readily calculable, as the lines connect the solar power generators in North Africa directly with the conurbations in Europe with the greatest demand for power. Fluctuations in the power grid can be compensated for with variable solar power. In this way the primary functions of the current coal and gas power plants are replaced one for one by renewable energy.

Furthermore, the researchers have ascertained that the construction of such an intercontinental HVDC line involves similar challenges to the construction of gas pipelines. The researchers have used the example of the Nord Stream pipeline to work out the most important factors for the success of such a major infrastructure project; this pipeline runs through the Baltic Sea, through 10 different countries, and connects Russia with Germany. "You could say that these are solar pipelines that supply valuable, that is variable, renewable energy to Europe from afar," summarises Trieb. Factors for success include full transparency of the project with regard to the public, so the project managers must also respond to the concerns and objections raised by the populations in the affected areas.

The BETTER study was initiated under a contract issued by the European Commission. In addition to DLR and the project coordinator CIEMAT, participants included Joanneum Research (JR) and the Vienna University of Technology in Austria, the Energy Research Centre (ECN) in the Netherlands, the National Technical University of Athens (NTUA) in Greece, the Observatoire Méditerranéen de l´Energie (OME) in France, the Potsdam Institute for Climate Impact Research (PIK) in Germany and the United Nations Development Programme (UNDP).