The sunlight and thermal energy collection method adopted in MHPS’s CSP system is a proprietary hybrid system combining a low-temperature Fresnel evaporator which collects sunlight while changing the angles of multiple mirror surfaces arranged on a plane, and a tower-type superheater which collects sunlight by heliostats. The result is the ability to produce higher-temperature steam at lower cost than earlier CSP systems. In this configuration, approximately 70 percent of all concentrated sunlight is collected by the Fresnel evaporator – which is low in cost – and the remainder is collected by the superheater. The newly completed testing facility covers an area of approximately 10,000 square meter, in which are located the evaporator, the superheater, and 150 heliostats that track the sun’s movements and use mirrors to reflect the sunlight to the focus point on the superheater. If connected to a generator, this system has the capacity to generate the equivalent of 300 kilowatts (kW) of electric power. 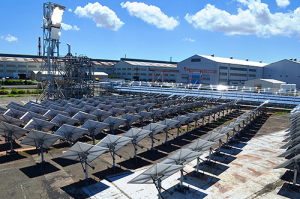 At the testing facility, verification of the hybrid sunlight collection system’s technology will be carried out in the following manner. First, the low-temperature Fresnel evaporator will heat water to initially produce steam near 300degC in temperature. The steam will then be sent to the superheater installed atop the small tower, where, by heliostat-based sunlight collection, it will be further heated to 550degC. Testing of the high-temperature thermal energy storage system will get underway in October, to investigate the viability of nighttime power generation.

CSP systems exist in a variety of types: the type described here is the most prevalent system commercialized outside Japan.

Mitsubishi Hitachi Power Systems, Ltd. (MHPS) was formed on February 1 2014, integrating the thermal power generation systems businesses of Mitsubishi Heavy Industries, Ltd. (MHI) and Hitachi, Ltd. in a quest to further enhance their social response capabilities in all respects. These include the technological strength to create new products of outstanding quality and reliability, the comprehensive strength in engineering to oversee projects in regions across the globe, and finely honed sales and after-sale servicing capabilities. MHPS aims to come out a winner in global competition and achieve a solid position as a world leader in thermal power generation systems and environmental technologies.