As the demand for energy from alternative sources increases, the solar energy industry is expected to gain substantial impetus. Solar energy can be used to harness electricity in two distinct ways. One is by using photovoltaic systems and the other, by using solar concentrators. The basic approach of converting solar energy into serviceable electricity remains the same in both techniques. With several nations across the world going solar, having understood the importance of generating energy from renewable sources, an increasing number of homes and commercial buildings are likely to have solar panels installed in their roofs.

Concentrated solar power (CSP) refers to the technology of harnessing the Sun’s energy and has the ability to provide electricity to hundreds of thousands of buildings, even when the sun is not shining. One of the most distinct characteristics of concentrated solar power is that once deployed with thermal energy storage, the technology produces electricity on demand. Furthermore, CSP, when deployed with thermal energy storage, allows the use of other renewable energy sources (such as solar photovoltaic and wind) to provide intermittent or variable electricity generation.

According to a report published by Transparency Market Research, the global concentrated solar power market, which in 2013 stood at US$2.5 bn, is expected to reach US$8.7 bn by the end of 2020. The ability of CSP technology to easily integrate with fossil-fuel-based energy sources in “hybrid” configurations significantly fuels the demand from the global market for concentrated solar power.

How does Concentrated Solar Power Work?

Concentrated solar power technology generates power from focused sunlight. Solar concentrators focus sunlight either in a photovoltaic or solar thermal system. The technology generally uses mirrors fitted with tracking systems to focus the dispersed sunlight onto a smaller area. A CSP plant can be classified into three sections, comprising the power block, thermal energy storage, and solar field. A solar field includes chains of parabolic fashioned mirrors. These mirrors are arranged in a distributed system in order to transfer the heating fluid from each dish into a central conversion station. The thermal energy system stores the generated energy for later use. The heating fluid is then transferred to the power block, where it is used for boiling water. The steam generated from the process is used by conventional steam generators to generate electricity. 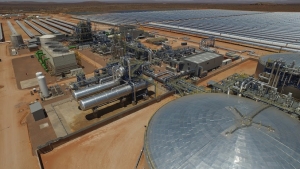 The rising awareness regarding global warming, coupled with the heightened concerns pertaining to carbon emissions from power stations generating electricity from fossil fuels, has impelled industries and policy makers alike to focus on alternative sources of energy. Governments from various nations have also started adopting appropriate measures for reducing greenhouse gas emissions. Exploring alternative sources of power is touted as a major step taken towards reducing the overall carbon footprint. The rising government support has thus become a crucial factor bolstering the demand for concentrated solar power around the world.