The 150MW solar tower and molten salt storage plant to be built in Port Augusta has been made possible by a ground-breaking pricing and contract structure that could help completely reshape Australian power markets, including the end of “baseload” power as we know it.

The South Australian government announced last week that it had signed a deal with US company SolarReserve to build the 150MW solar tower with molten salt storage project – to be known as Aurora – just a few kilometres from the now closed Northern coal-fired power station.

The output of Aurora will be around 500GWh – roughly the same as the annual consumption of the state government and the various assets it owns.

But it is the unique nature of the contract that explains the difference between what the government will pay SolarReserve ($75-$78/MWh), and what SolarReserve will receive, and will likely serve as a template for more “dispatchable” renewable energy projects in the future.

Essentially, the S.A. government will buy some of its needs from other sources in the market when demand and the price is low. Aurora will cover the government for energy and prices when the government’s demand is at its highest, around the middle of the day.

But because the government can and will buy some cheap power elsewhere, Aurora will store its solar power in its molten salt storage tanks so it can sell into the market at the system peaks, in late afternoon and early evening, when the market prices are highest, boosting its revenue.

For those in the market, it is a little like a power purchase agreement where an off-taker takes part of the output, while the rest of the plant goes “merchant”. But this contract has a lot more flexibility and is more flexible than plants that use traditional cap contracts.

Danny Price, from Frontier Economics, who helped the government design the contract, says it was struck with a mixture of a capacity purchase agreement (CPA) and a hedge, with the CPA designed to break down the fixed costs and the variable costs.

“We had to have a contract for wide range of technologies,” Price tells RenewEconomy, and the contract structure was designed to level the playing field between dispatchable renewables, which may struggle following loads MW for MW.

Although the fine details of the contract are not being released, at least not yet, the significance should not be understated.

South Australian energy minister Tom Koutsantonis boasted last week that it would send “shivers” through the spine of the coal industry – not that there is one left in his state, but there is no reason why this cannot apply in other states.

There has been great debate about how traditional energy markets, which rewarded baseload power with expensive peaking capacity, could evolve to include renewables with zero fuel costs such as wind and solar.

Price says rather than redesigning the whole system, this contract structure plays within the current design – and the ultimate goal is to provide more stability to markets. It also avoids the pitfalls of conventional capacity markets, which have been shown in Western Australia to be disastrous if badly designed.

Aurora will have no incentive to do as wind and solar PV farms do, and bid in negative prices to guarantee dispatch, and the fact that it is competing in peak times means it reduces the ability of the thermal players to game the market up to pricing peaks of $14,000/MWh. 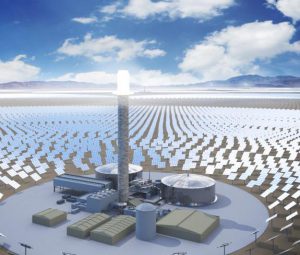 What’s more, it’s a cheaper technology than gas or new coal. “You couldn’t even buy the gas for that price – let alone the capacity,” says Price of the $75/MWh contract price. And new coal, he says, cannot be built for less than $100/MWh.

“Who would build a gas or coal-fired generator if you can get a dispatchable renewable energy technology like solar thermal for $70/MWh? Why would you do it?

“It is a terrific outcome for the market and for renewable energy. It shows how you can construct a contract to encourage dispatchable renewables.

“It means we can get a renewable energy technology up that is cheaper than thermal plant. So while the federal government stuffs around on carbon pricing, technology is just taking them over.”

Price said one of the keys to the project win was the learnings of SolarReserve from its Crescent Dune facility in Nevada, which has been operating for just over a year -– apart from a few months off-line to deal with a leak or leaks in the molten salt storage tank.

Price said the key to the technology was the receiver, and it was “a very good technology.” SolarReserve had learned a lot from its first plant, capital costs had fallen 40 per cent, and costs were continuing to come down.

“The technology is not really a risk. We get the benefit of the learning so far, and we are second cab off the rank.”

Please read this piece by Simon Holmes á Court, which looks at some of the other interesting aspects of this development, particularly his observation that solar thermal technology is already nearing the price predicted by Alan Finkel for 2050, just a few months after the Finkel report was released.

There are a few things that could still go wrong.

The current contract price is dependent on the $110 million equity  partnership promised by the federal government both before the election and when it was negotiating a tax package with Senator Nick Xenophon, whose dual-citizenship means his immediate political future is now subject to a High Court ruling.

It is clear, and SolarReserve CEO Kevin Smith said as much in a radio interview on Monday, that the pricing would have to be revisited if that component did not come through.

He did, however, say that financing has been lined up. It is not thought that renewable energy certificates will contribute largely to the deal.

While they are trading round $80/MWh now, they are expected to have fallen dramatically by the time this plant is up and running in 2020, and could have negligible value before they expire in 2030.

Solar towers with molten salt storage, because of their high storage levels, offer the flexibility to offer either continuous power 24/7 (baseload), higher outputs over shorter periods to meet specific demand (such as powering Las Vegas between noon and midnight), or acting as a “peaking” power station.

This new South Australian plant appears to be designed to include the last two components. Its nominal capacity of 150MW will likely be reduced to 135MW during the day, where it uses some of its own power to operate and control the sun-following field or mirrors.

But by being dispatchable in such a way, the solar tower will beat both coal and gas at their own game.

Coal’s big weakness, apart from the fact that it is now dirty and expensive, is that it can’t readily be turned off, which is why loads such as hot water systems are switched on only at night – to give the coal-fired power plants something to do during the night.

The arrival of “base-cost” renewables, however, means that much of the power supply can be delivered by wind and solar at cheap prices.

And the emergence of storage in its various forms – batteries, pumped hydro and now solar towers – means that output can now be dispatchable, or can be balanced, and can mean manufacturers may no longer have to operate only at night when the power cost is low. Cheap power may be a day-time event.

Aurora will not need to operate all the way through the night, although it could. If the government needs power, it will likely buy from other sources at a cheaper price, Aurora will deliver to the government during the day, meet and cover its peak demand, and sell into the afternoon and evening system peaks.

Of course, Aurora is not the only solar thermal project happening in the world right now. SolarReserve is building another plant in South Africa, and other companies are building plant in Morocco, Chile and China. Keith Lovegrove, director of the Australian Solar Thermal Energy Association, recently returned from a conference in China, where he says the main news is that of 20 announced projects of between 50 and 100MW,  three are well under construction and a further five will begin soon.

“The attached pic is a visit to the Shouhang 10MW molten salt tower system there in Dunhuang,” he says.

“It looked good (from the outside at least). Right next door that company is well into building the 100MW salt tower system that is one of the three mentioned above. CSP is alive and well in China and maybe has finally a good chance of life in Australia.”

Please listen to our podcast with Keith Lovegrove and David Leitch, and this article’s author to discuss the solar tower project, its economics, the implications for the market, and what may follow.