Concentrated solar power accounts for only a fraction of the overall green energy market, but recent research suggests smaller-scale designs could help revitalise interest in the sector. We talk to Luis Crespo, president of Protermosolar, Spain’s solar thermal electricity association. 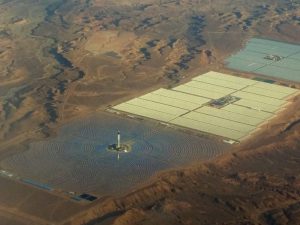 With demand for clean, affordable energy spiking around the world, it may seem counterintuitive to suggest that scaling down concentrated solar power (CSP) operations could help revive the industry.

However, despite the CAPEX costs of building new concentrating solar power plants having fallen by almost 50% between 2013 and 2018, the scale and complexity of such projects remains prohibitively expensive compared with alternatives such as solar thermal towers with storage, solar photovoltaic (PV) or wind projects.

As a result, CSP continues to account for only a fraction of the green energy market and emphasising plant storage value is now seen as key to attracting the investment required to kick-start the sector.

“CSP generation increased by an estimated 8% in 2018,” says the International Energy Agency (IEA). “Nevertheless, CSP is not on track with the Sustainable Development Scenario, which requires annual average growth of almost 26% through 2030.

It is a view that is shared by Luis Crespo, president of Protermosolar, Spain’s solar thermal electricity association and author of a recent research paper entitled ‘Lateral Thinking on Storage: Getting the Most When it is Empty’.

“The electrical sector is undergoing a period of rapid transition, and planners are only looking at the short-term on how to manage the penetration of competitive but non-dispatchable technologies such as wind and PV,” he states. “CSP is the most competitive renewable technology to replace PV after sunset in sunny countries – the main factor preventing its wide-scale deployment is simply the lack of long-term planning criteria.”

Spain has for decades been at the forefront of efforts to propel solar thermal technology into the mainstream, both domestically and worldwide. The nation’s installed capacity stands at around 2,300MW, while the contribution of Spanish companies in international markets is around 75%.

Crespo agrees with the IEA that optimising CSP’s proven storage capabilities – whereby the solar collector system within the solar power tower, trough or solar dish/engine heats an energy storage unit during the day, and the heat from the storage system is then used to generate electricity in the evening or during cloudy weather – is the way forward for CSP operators and the sector as a whole.

“It makes no sense to generate from CSP plants when the sun shines, as PV is much cheaper,” he explains. “After the sun sets – and the whole night through – there are important demand requirements and there is no other renewable technology that can satisfy this type of demand at lower prices.

“Extending PV production with batteries with 2–3 hours of life will not solve the problem and will end up costing more than double the price of PV systems without batteries during daytime.”

One of the most popular CSP technologies, solar power towers, use a large field of flat, sun-tracking mirrors called heliostats to reflect and concentrate sunlight onto a receiver on the top of a tower.

A heat-transfer fluid is then heated and circulated in the receiver and used to produce steam, which is converted into mechanical energy in a turbine, which powers a generator to produce electricity.

However, recent research by Crespo and Francisco Ramos, PhD Physics, director at Nevada Software, concludes that many large-scale power tower plants are inefficient, since the reflected light begins to disperse as it travels across the large distance between the CSP receiver and the heliostat field.

“Currently, the main issues concerning CSP tower plants are scalability limits, lack of standardisation and single critical path failures,” Crespo explains. “Our research demonstrated that by splitting large surrounded heliostat fields into smaller fields with polar design, the efficiency can be increased close to 25%, and single storage and power blocks of larger commercial units can be used.

“In addition, field designs and receivers can be standardised, reliability can be increased and, at the end of the day, better-performing and cheaper CSP tower plants can be deployed.

“In the future, towers and troughs will share the market depending on the latitude of the site,” he continues. “In latitudes above 30º, I think that the multi-tower concept – but still of a large size, equivalent to around 30MW per unit – will be the preferred solution.”

The precipitous drop in the CAPEX costs of building new CSP plants has been accompanied by a spate of promising new-build projects in emerging markets such as the Middle East and China.

The latter connected its first 100MW large-scale parabolic trough plant to the grid in January and currently has eight large-scale CSP projects with a total capacity of 500MW in operation, while in Dubai the first stage of a $3.9bn, 700MW parabolic trough CSP plant – part of the Mohammed bin Rashid Al Maktoum Solar Park – is due to be commissioned in the fourth quarter of 2020.

However, Greentech Media notes that, according to recent analysis from Lazard, the unsubsidised levelised cost of energy from a new solar thermal tower with on-site storage is $126–156/MWh, making CSP pricier than geothermal energy and much more costly than utility-scale solar or wind.

However, CSP is the cheapest technology after sunset, and the future role of CSP and PV will be to complement each other, Crespo says.

He takes issue with the view that cost is an unsurmountable hurdle to widespread adoption of CSP, noting that the Dubai CSP project was won with a record bid of $0.073/KWh, without subsidies.

“That was cheaper than the price of gas combined cycles,” he says. “In addition, total cost system studies have demonstrated that the total electrical generation cost in a given country will be lower with CSP plants than without, as the captured price of PV plants – and correspondently the reduction of the necessary financial incentives – will be higher.

“Therefore, CSP plants – with their current costs – will make systems cheaper, and hopefully CSP cost will continue go down as there is room for cost reduction; for example, by reducing the size of large heliostat fields, as discussed.

“There are no proven examples yet, but there are neither technical barriers nor uncertainties preventing CSP plants such as these becoming a reality in the future.”