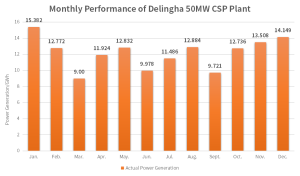 The plant has been operating in good conditions. As shown in the monthly power generation in Figure 1, it has 124 days seeing a completion of 100% of the designed generation. In addition, if we deduct the days from September 28, 2022 to October 7, 2022 where the grid was under line maintenance and waste about 4.267 GWh, the annual power generation could reach 103.18% of the design value.

After connecting to the grid on December 30, 2018, the SUPCON SOLAR Delingha 50MW Molten Salt Tower CSP Plant quickly completed a short trial operation in the first half of 2019 and started normal operation from July 2019. In the first full year after that, the accumulated actual power generation reached 122GWh, setting the highest operational record among the tower CSP plants in the world. Later after the first year, thanks to joint efforts of the project owner and the Cosin Solar project team, the plant operation strategy was continuously improving through better coping with complex working conditions and weather changes as well as troubleshooting on a series of sudden equipment failure.Till the end of December 2022, the overall accumulated actual power generation hit 421GWh. There is no doubt to say all the long term better performance than the other tower CSP plants under operation in China proves that SUPCON SOLAR Delingha 50MW Molten Salt Tower CSP Plant has become a model in terms of operation around the world.

SUPCON SOLAR Delingha 50MW Molten Salt Tower CSP Plant, 50MW of installed capacity with 7-hour molten salt storage system, is one of China’s first batch of CSP demonstration projects. It has a solar field with 27,135 sets of 20m2 heliostat, and is designed to generate 146GWh electricity annually. Aiming to save 46,000 tons’ standard coal, and reducing 121,000 tons’ CO₂ emission, it is producing enormous environmental and economic benefits. Fully designed, constructed and operated on Cosin Solar’s own patented technologies, now the plant has passed complete technical assessment of Fichtner, a German independent engineering consulting company, earning the remarks of “The design of the plant corresponds to state-of-the-art design known by Fichtner”.